In his 2011 thesis at Orleans University found also here, David Le Bris compares the stock market performance for France and US for the period 1871-2007.

We see that investment in France made sense compared to the US until 1913. It has been 105 years since it no longer makes sense to invest in France. Before World War I, the return/risk ratio (mean/standard dev in table 1) was slightly advantageous in France. While return was lower for French investments, volatility was much lower, so that investing with leverage in France would produce higher returns for comparable risk.

Since 1913, it has become much riskier to invest in France, for much less return. It does not make sense to invest in stocks France. The thesis also covers bonds, where the case is even stronger as inflation led to very negative returns on French bonds. 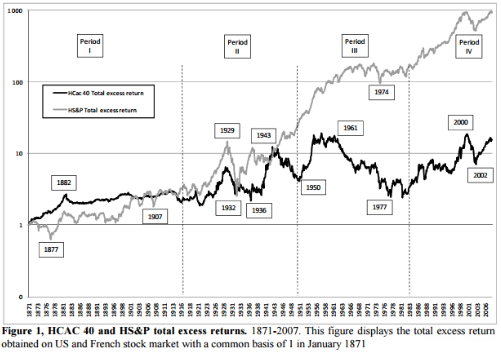 It turns out that Keynes advocacy of the euthanasia of the rentier was applied much more thoroughly in France. The problem is more than 100 years old, it predates the social unrest of 1936 or 1968. French people got used to a stronger and more authoritarian State than Americans.