For reference, each GBTC unit has nav computed based on 0.000936169 BTC. The GBTC quote is subject to standard delay.

As mentioned by the Celsius CEO, GBTC became a way to earn a return on BTC since its premium on BTC in 2020 has become a discount in 2021. That's assuming that the price converges to NAV, which is something GBTC was discussed in his AMA back in March when such a buying program was in place, but is not in the news since Q2. 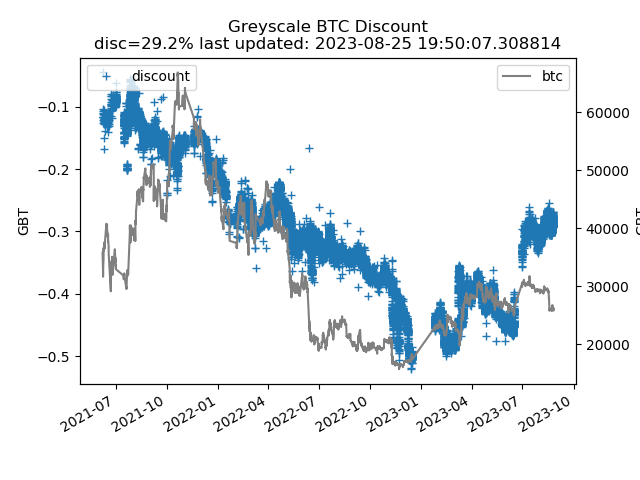 A way to capture this is to keep some spot BTC with Binance, Kraken, or Deribit, sell the future when GBTC discount grows and buy some GBTC on your brokerage account. Buyback the future and sell the GBTC when the price has converged.

In the meantime, you earn the future contango and pay the broker borrow rate.

The Grayscale Bitcoin Trust is a US stock exchange traded vehicle holding Bitcoin. The trust is traded in the US under symbol GBTC, and trades in Pink Sheets with good liquidity. It charges 2% per year for administration, which is a rather high fee, compared to holding BTC in a wallet, which is free.

Unlike an ETF, the trust can trade at a significant premium or discount to the exchange value of BTC because the trustee receives fees and market makers cannot exchange shares for the underlying.

As market demand for exchange traded Bitcoin (for 401(k) and other accounts) can be high, investors are allowed to create shares by bringing bitcoin, and the shares are unlocked after 6 month.

When there is a large premium, people could borrow bitcoin for 6 month to create shares and arbitrage the premium provided is stayed positive for six month. This happened for much of the trust history and especially 2020 where a premium above 20% existed.

In Jan 2021, ETF with lower fees became available in Canada, and the demand for GBTC shares collapsed to the point that a discount developed. From March to May, DCG, which controls the trustee announced that it would seek conversuib to ETF but in the meantime, buy back shares and sell BTC for an amount of up to 750m. The trustee did so according to its 2021 Q1 filing, at a time when the discount went to -5%.

The discount is now at all time highs again above 20%, and there is no talk yet of selling down assets again. The trust management has an interest in keeping the funds invested to earn the large 2% fee. However, they have a history of selling down assets, which is a faster way for them to earn money.

There have been discussions of ETF filing since 2013 in the US, but nothing happened except futures based ETF.

On the opposite side of the spectrum, one sees ESG enthusiasts push for investment in copper