Temperature changes a lot with season and altitude. An average base temperature is generally computed over a 30 year period to smooth out short-term variations.

Paleoclimatology: variation of +14C to -6C average base temperature

Evidence of past temperature can be gathered directly or indirectly. The further back we go in time, the harder it is to get a precise temperature.

There was much higher temperature during Eocene era (dinosaur time 50m ago) with an average temperature of 14 degree higher. The climate during earlier Permian era is much more chaotic, and volcanic activity attending continental formation has an effect on climate.

The coldest place on earth is Antarctica's Vostok lake over which a 3000m high glacier sits. The precise record of atmospheric samples trapped yearly allowed us to validate geologist Milankowitch theory. The earth temperature during that period was mostly determined by variations in earth orbit around the sun. The orbit changes slightly around different cycles:

While Milankowitch expected a 40k year cycle for glacial age, with axial tilt to dominate, we observe 100k cycles. The mechanism for glacial age is not well known yet. 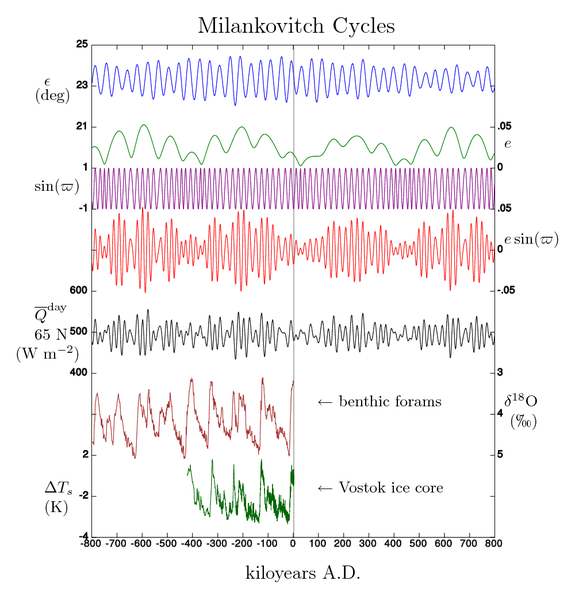 We see that the last ice age stopped less than 20k years ago, which caused the era of the Holocene. Holocene temperature

Recent climate is much better known. Holocene maximum temperature was 8000 years ago, and without anthropogenic warming, it is expected that we get back to a glacial age:

The last 2000 years have even better records.

We have very good climate measurements worldwide since 1880. The scientific on global warming is that increase since 1960 is due to human activity:

The estimation of impact on sea level range from 20cm by 2100 to 7 meters over the next millennium. The rest of the impact is shorter winters in temperate areas and increased risk of desertification in tropical areas.

While changes occurring over a thousand years, the concern here is about faster change and the inability of the ecosystem to adapt to the new climate. Problems are expected but are not well quantified or determined.