US Listed ETF wiped out

US and UK retail investors in ETF and ADR have been effectively wiped out by the Anglo-American establishment while the underlying stocks are doing ok for now on the Moscow exchange. We see here yet another form of risk introduced by investing in the convenient ETF format which, similar to oil ETF USO in March 2020, makes this investment vehicle fall catastrophically compared to its mandated target.

Futures have the potential for unlimited margin calls, and bonds can default, but let's see what the ETF manager can do to cause a total loss on a portfolio of stocks. Aren't stocks supposed to be property titles?

Last article from Feb 28th by CNBC points to the fact that US-based Russia ETFs may seem more robust for price discovery than the Moscow stock market that was closed. A similar story from WSJ. News are curiously silent on this since then.

We have a look at BlackRock's ERUS ETF composition. We see the usual Gazprom, Lukoil, Sberbank and the tech co TCS Group: 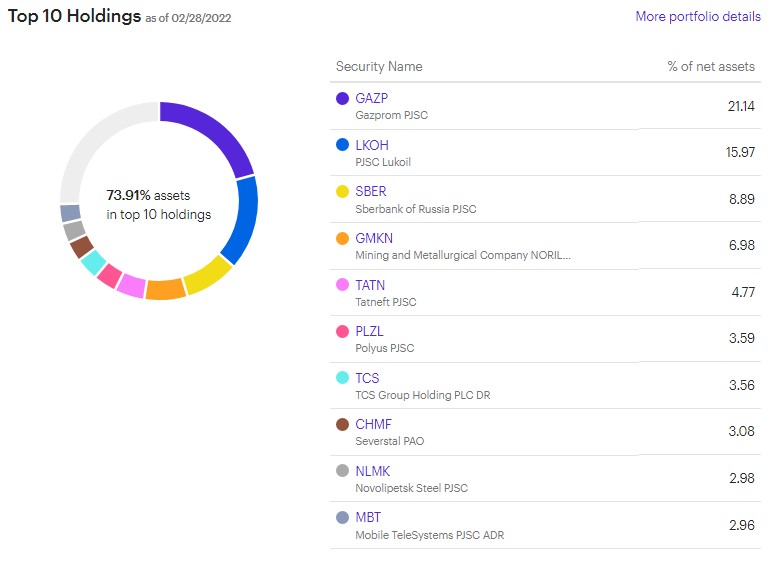 Gazprom stopped trading on Feb 24th, when ERUS was worth USD25. The ETF last traded at USD8 in March 2th after it dropped more than 20%. Substitutions were forbidden on the previous day: 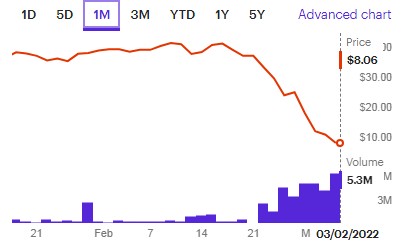 If we check the ETF composition, something weird happens: there is mostly cash. All stocks have been liquidated at a fire-sale price:

But how much cash did Blackrock manage to get for USD23 worth of stocks? Market action wiped out 20% (which might be recouped eventually when the situation normalizes, as we all hoped it would), we see the new NAV according to BlackRock is $0.07. The ETF manager basically converted the ETF into cash in the middle of sanctions and lost 99.8% of the value.

In the meantime, Gazprom reopened 20% up on March 25th, so the Moscow exchange investor has something worth between USD25 and USD30 (in Russian Ruble), and the American investor has no stock and $0.07 of cash.

There is no media coverage on this.

US listed foreign ETF: much higher risk than the underlying.

Meb Faber and Lyn Alden were known to advise some diversification into low P/E countries such as Russia. Lyn said a few months ago that the main risk with Russia at such prices was the legal risk for foreign holding of Russian assets in case of sanctions.

Ray Dalio stated since the pandemic that the US market is currently overpriced, and investing in other less pricey markets (including China) is the right thing.

Russia ETFs listed on US exchanges are converting to cash and wiping out 99% of their holders' wealth for what amounts to political reasons. Arguably, this can happen for any other BRICS.

Another CNBC Article mentions that Russian stocks are removed from MSCI and FTSE emerging indices at a 0 price, being reclassified as "standalone market", prompting liquidation by Western ETF.

We see that Vanguard VWO no longer holds Gazprom, whereas it used to be 1.5% of its holding. MSCI and FTSE decided to remove Russian stock at 0 from their emerging market index, causing a liquidation by ETF providers. While they might answer that it kept the general ETF trading, I view the unorderly liquidation as a breach of fiduciary duty to their investors. Those ETF managers did not act in their investors' best interest.

Blackrock reports that it still holds 25mln shares of Gazprom, but these are valued at USD3114. So it looks like Erus uses for valuation the last close prices.

Disclosure: I looked into this as I had a small ERUS position that I had purchased in May 2020 which I forgot to check, it appears that many EM ETFs have actually permanently wiped out their Russian component. The stock components have resumed trading in Moscow.