I have not been bullish about bonds since 2003, so I am going to steelman the investment thesis for bonds. I review below the famed 60/40 allocation in light of current data.

Given the high volatility of annual returns, long-term data over more than 50 years is required to allow sufficiently precise estimates of long-term return rates. The economist Robert Shiller does an excellent job publishing US data from the time Standard Oil was founded by Rockefeller to the present. 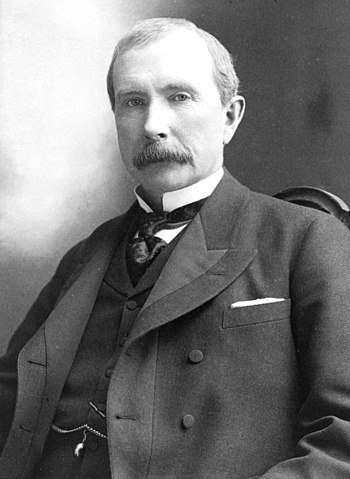 The graph below explains why the 60/40 portfolio is so popular. Long-term real returns for equity are higher at 7% whereas bonds real returns are only 2.5%. However, using a mix of bonds and equity allows getting much lower volatility due to the anticorrelation of the assets. 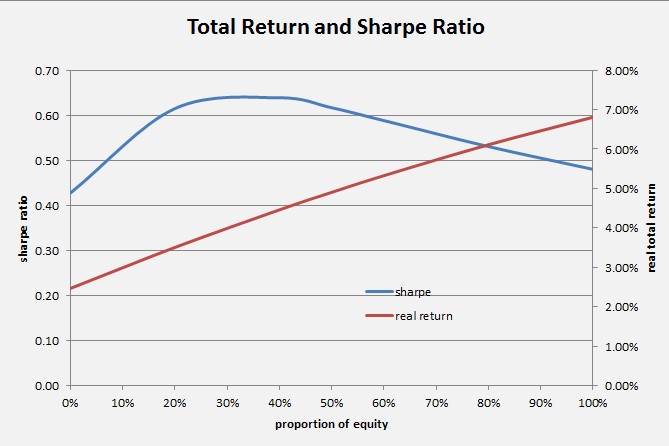 Risk-adjusted returns (Sharpe ratio) are improved by using a mix of equity and bonds, and using 60% of bonds allows for keeping performance nearer that of the stocks.

Another way to visualize the risk is to view max drawdowns. Investors who started buying equities in 1929 did not start making money until 1948 and were scarred for life. Conversely, investors who bought only bonds in 1940 did not break even until 1983 in inflation-adjusted terms. 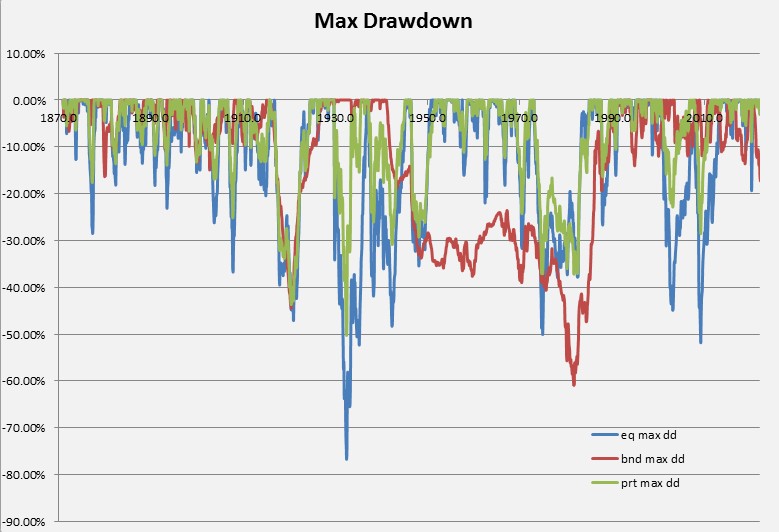 More recently, an investor buying equity in 97 would have the same inflation-adjusted savings 12 years later. Again, the S&P is a relatively successful index compared to other countries, and Japanese investors saw prices from the 80s in 2009.

We see that the 60/40 portfolio has much better drawdown characteristics.

We show the total long-term real return for an equity portfolio at 7%, and a bond portfolio at 3%. The 60/40 portfolio has intermediate performance at 5%. We show reinvested returns in the natural log scale. As these returns compound over 150 years, reinvested performance for $1 is x29,000 on equity, x41 on bonds, and x3,100 for the 60x40 portfolio. 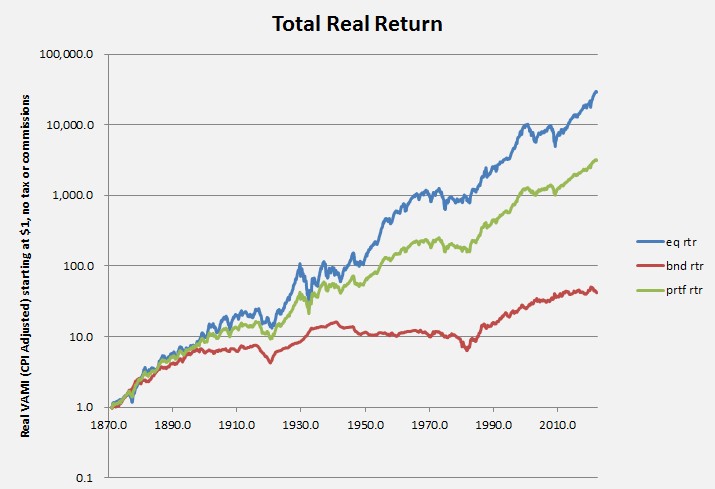 The results are robust over different countries: in the long run, equities outperform bonds, and bonds outperform cash. What is specific to the United States is that the USD was a "strong currency" and inflation remained below the bond yield, so bondholders made a consistent positive return over the long run. This is exceptional compared to other developed countries.

The CPI effect is taken into account here as its average of 2% is not negligible compared to the average nominal returns of 5% on bonds and 9% on equities. 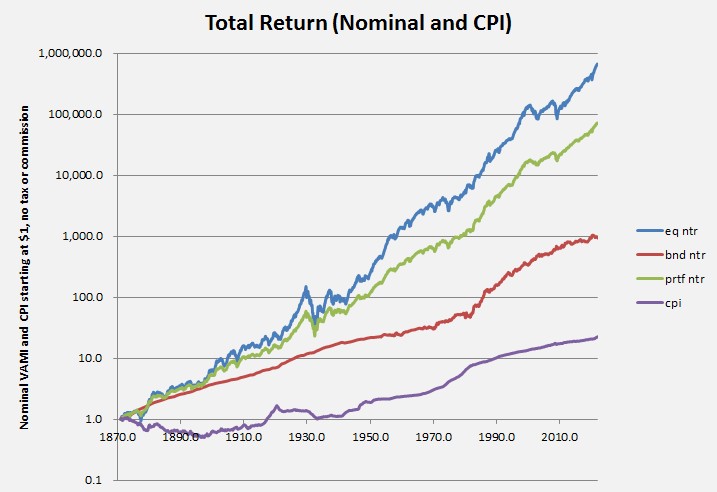 The graphs for inflation and nominal returns show some changes:

When producing the historical volatility of the assets, we see that equity has always been the most volatile asset. Experts say that there is a positive market premium for equity risk. What is interesting here is that CPI could not be targeted under a gold standard, which led the inflation rate to be volatile, whereas the bond rates were moving in a narrow band. 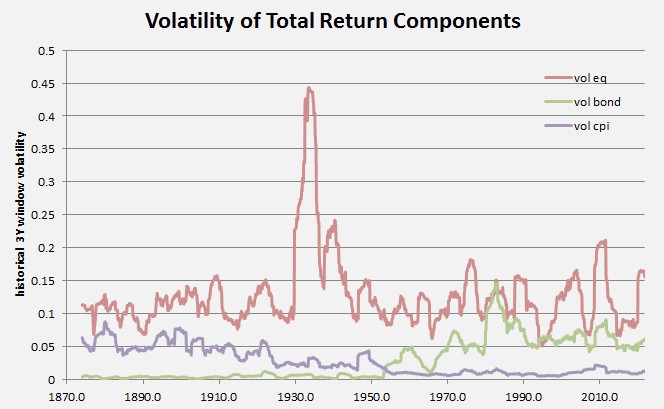 Investors appear to have repriced the vulnerability of bonds to inflation as bond and inflation volatility "flippening" happened in 1953. The realization that dividends increase with inflation led to dividend yields required by investors going below UST rates in 1958. 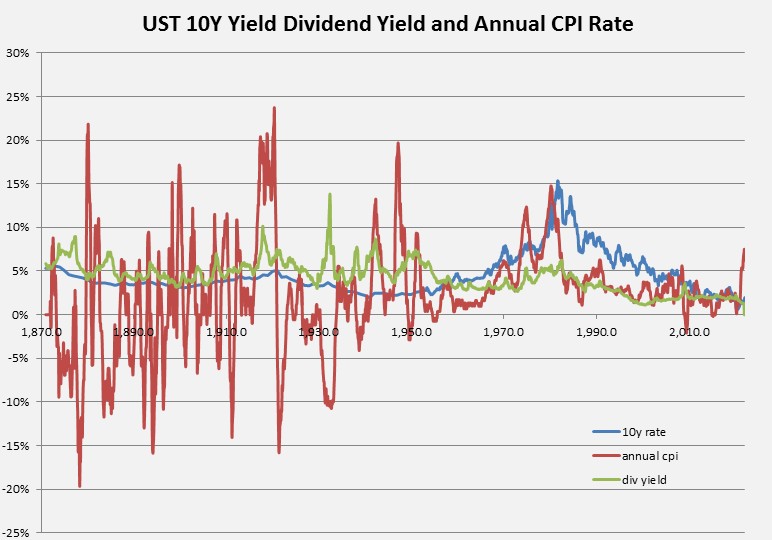 The situation has not changed since 1950. The USD CPI became stable after that date. We observe three CPI upward shocks in 69, 71, and 74 followed by the Volker rate hikes which spiked in 83.

After that, CPI measurement was adjusted down about 2% to help reduce inflation indexing induced inflation, and CPI was clearly lower than rates until 2003. Since 2003 inflation is very near UST yields and the potential for bonds to produce positive real returns is more limited.

We will discuss diversification effects, as the bond shows excellent anti-correlation with the stocks since then.

We show returns and volatility of real returns by decade below. The 1871 to 2021 period has 15 decades. We see that consistent with the first graph, a 60/40 portfolio has a better Sharpe ratio than an equity portfolio in most decades.

Inflation has been tamed in the last 40 years. Policymakers benefitted from the opening up of trade with Eastern Europe and China, which created deflationary headwinds making it possible to lower rates.

Also, it is notoriously difficult to define a price index. The CPI measure reported after 1980 is underestimated by 2% to 3% compared to prior methodology. The changes were politically motivated to ensure that inflation indexed welfare benefits did not crowd out the active population income.

For our 15 decade periods, the sharpe ratio improvement is greatest when the real yield is high.

In fact, the relation between high real rate and high real bond returns is a mathematical identity. We know that returns are bound to be disappointing if bond yields are low and inflation is high.

Bond Correlation with Stock and the Fed put 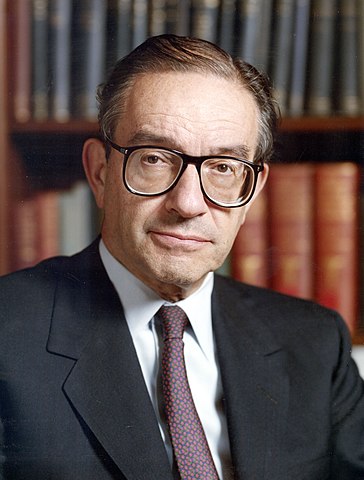 While textbooks are quick to explain that bonds and equities are anticorrelated, this is actually a recent phenomenon linked to the Greenspan put after the Enron/Worldcom credit crunch of 2003 as shown in the table below:

As we see above, the anti-correlation has been negative recently, due to every central banker since Greenspan cutting rates when equity prices go down.

Many market participants are leveraged, and therefore have funding risks rather than inflation risks

While the economic variable of interest for real money accounts is inflation, a great number of leveraged investors funding themselves with short-dated rates are looking at the curve steepness.

Conclusion: best crisis protection since 2003, but likely to underperform given real rates

The 60/40 portfolio has lower long-term performance but a better Sharpe ratio than an equity-only portfolio. However, there are a few salient facts:

The case for bonds is most compelling when they pay 5% above a gold standard currency, or when they pay above 5% above inflation. There is then an obvious macro case for stimulative convergence that policymakers will exploit. The picture is not as clear since 2003. The main benefit of a bond allocation now is anticorrelation. With negative expected returns but upside during crashes, allocating to bonds has become one of those black swan strategies similar to options.

Still, portfolio defense is important to help investors cope with the possible 20 years of underperformance on equity and 40 years on bonds. Some finance professionals have a tendency to unconditionally coral investors towards equity and bonds as if "there is no alternative". This question boils down to the definition of the investable universe. When a finance professional is involved, he may be constrained by what investments.

Alternatives such as residential and commercial real estate and farmland can also be expected to lower inflation-adjusted portfolio returns. Volatility premia can be extracted to generate a synthetic rate positive return. While those are alternatives to buying bonds with a negative real yield, those alternatives are much less liquid and more complex to put in place than bonds, their returns are decorrelated from stocks, but liquidations by other investors during a crisis can cause correlation to appear. We saw that in Mar 2020, the US treasury started to sell off, but the central bank intervened correlations were repressed to the negative territory.